One of Nashville’s most famous residents, Scotty Moore, also happens to be one of the men who changed the world.

That happened 60 years ago, not far away, in Memphis. In 1954 Scotty, bass player Bill Black and a young singer with the unlikely name of Elvis Presley, got together at Sam Phillips’ recording studio and laid down That’s All Right. 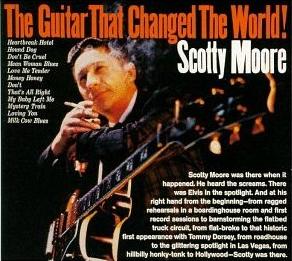 Scotty moved to Nashville in 1964, when Elvis was lost in a haze of ever worsening movies, and he has been here ever since.

Now 82, he has worked as a recording engineer, session musician, recording artist and music shop owner.

In 1965 Scotty put out a solo album entitled The Guitar That Changed The World, containing instrumental versions of the Elvis hits on which Scotty had played.

The tracks have more of a Nashville sound to them, and they were indeed recorded at Nashville, in the Colombia Recording Studio at 804 16th Avenue South, in the early part of 1964.

There was the fact too that this was an album that featured the production sound for which Nashville was then becoming famous, and accompanying Scotty were D J Fontana and Buddy Harmon on drums; Boots Randolph on saxophone; Bill Purcell on piano; Jerry Kennedy on second guitar; Bob Moore on bass; and the Jordanaires.

Scotty used a Gibson Super 400 on the album, but in the early days with Elvis he had used a Gibson ES-295, an instrument originally conceived as a jazz guitar, which he bought in 1953 from the O K Houck Piano Company in Memphis.

Sam Phillips fired Scotty from his job as Sun manager for making the album for Epic. Further, the album reportedly barely made back its production costs.

A sad story, perhaps, but time has been kinder to Scotty who is now rightly regarded as one of the guitar greats. 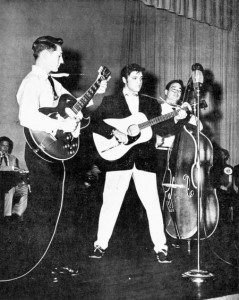 The licks of country guitar The Big O
Scroll to top