There is an amusing story attached to one of the first players of the electric steel guitar, Alvino Rey.

On the night of the performance, as the orchestra struck up, the lights were turned down. Sadly for Rey, the lights were a detail he had forgotten. And he had plugged his amp into the lighting circuit. 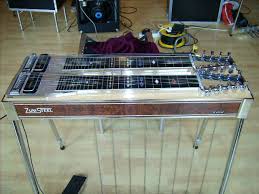 There is quite a difference between these two types of instrument.

The lap steel usually has six strings and is tuned to either standard guitar tuning or an open chord, while the pedal steel has between 10 and 14 strings per neck and two or even three necks, each tuned differently.

Up to eight tuning pedals and another eight knee pedals are used to alter the pitch of the strings, and playing this instrument is necessarily complex.

For this reason the pedal steel guitar player is highly valued in Nashville, as the virtuoso will add a high, lonesome sound to a recording.

The early instrument Rey was playing was a lap steel guitar. The pedal steel instrument had grown out of the lap steel, and the 1940s had seen many innovations.

It was the early 1950s that first saw the pedal steel guitar on hit records. The first was “Slowly”, a number one recorded by Webb Pierce and using a double-neck eight-string, two-pedal Bigsby guitar.

There was a resulting huge demand from musicians, bandleaders and the public for the pedal steel guitar, and Bigsby, who worked out of his garage, couldn’t make enough.

Other guitar makers rushed to fill the gap: Fender, Sho-Bud, Wright Custom and Emmons were amongst those who brought out instruments at this time that quickly found their way into the new recording studios of Nashville. 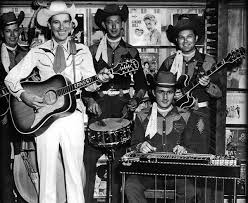