Natural-born musicians, singers and songwriters do not necessarily have a sound grip of music theory. What they do comes from the heart, and being confronted with a studio setup can be intimidating.

Neil Matthews understood this. He was born in Nashville in 1929, served with the US Army during the Korean War, and after his discharge he achieved fame as a member of the Jordanaires. 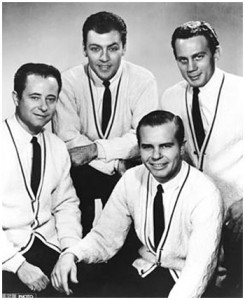 With Nashville becoming an important recording center in the late 1950s, and with the Jordanaires backing so many players and singers, Neil devised a system of transcribing music by writing out the chords as numbers rather than by using chord names.

Known as the Nashville Number System, this allows anyone with only a basic knowledge of music theory to follow chord structures, even when improvised, for the chord changes can be communicated mid-song simply by someone holding up the requisite number of fingers.

The score is written out as a series of numbers, with the key written at the top of the chart. The numbers do not change if the singer or the music shifts into another key, they simply become relative to the new root note.

The beauty is that the system is universal. It is now understood and used way beyond Nashville, and frees up musicians and songwriters to concentrate on the creative work, rather than struggle with music theory.

Neil Matthews did not actually invent the system, for it is based on the Roman numeral system to represent chords. Subsequent to Neil’s work, Charlie McCoy has further developed the system.

There are now several books available, along with online tutorials that will teach you how to play the Nashville Number System. It looks complicated when viewed for the first time, but with a little practice most musicians can begin to think in numbers rather than chords.

The Big O The pedal steel guitar
Scroll to top