Not many piano players have a statue dedicated to them, so the statue of Owen Bradley at Owen Bradley Park in Nashville is a significant landmark both in the city and its music.

Bradley, who was born in Westmore-land, Tennessee, had started out as a piano player but morphed into a music arranger and songwriter, taking a job with Decca Records in the late 1940s and becoming vice president of the label’s Nashville division in 1958.

His timing was impeccable. Nashville was attempting to shake off the folksy image of country music and develop a more pop-oriented sound. There was however little in the way of recording studios, and no A-Team.

One of the few recording facilities was Bradley’s own studio. Together with his brother Harold, a guitarist, he had in 1954 bought an old rooming house at 804 16th Avenue South, and built a studio in the basement.

Outgrowing that, they added a military-issue Quonset hut to the back of the house, and turned it into a studio.

This was where the Nashville Sound began to coalesce, with Bradley’s crew of hand-picked musicians backing emerging artists and creating some of the biggest national and international hits of the day.

In 1962 the brothers sold the property to Columbia Records and bought a farm outside Nashville, where they built what was to become the equally legendary studio known as Bradley’s Barn.

The Quonset hut was used until 1982, when it was converted into office space until, in 2006, philanthropist Mike Curb bought the structure and had it restored.

Today, the hut serves as recording classroom for Belmont University, where bemused students get to see how valves and tubes helped to create magic. 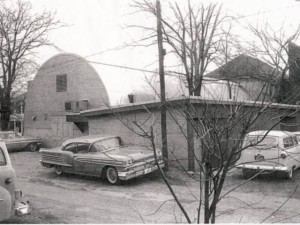 As for Owen Bradley, he is not that far away, sitting in bronze at a bronze piano, and keeping a watchful eye open.