One of the sessions that really put Nashville on the map as a recording center was Heartbreak Hotel, cut during Elvis Presley’s first session for RCA Victor after he had left Sun.

There were very few recording facilities in Nashville at that time, and RCA didn’t have their own studio there. 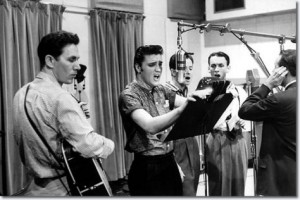 Elvis arrived on January 10, 1956, two days after his 21st birthday, at a building at 1525 McGavock Street, where RCA was renting studio space from the owners, the Methodist Church’s Television, Radio and Film Commission.

Elvis had picked up the demo for Heartbreak Hotel at the Country Music Disc Jockey Convention in Nashville in November of the previous year, and he arrived at the studio without any authorisation from his new label to cut the track, who consequently had little idea how to record it.

The first track he recorded that day was I Got A Woman, a reasonable potboiler but not a single.

Second track in was Heartbreak Hotel.

Along with his regular band of Scotty Moore, Bill Black and DJ Fontana, Elvis was joined by RCA players Chet Atkins on guitar and Floyd Cramer on piano.

Producer Steve Sholes wanted to recreate the slapback sound that Sam Phillips had achieved for Elvis at Sun, but he didn’t know how Sam had done it. Sam had in fact used two tape recorders with a slight time delay.

The acoustics at 1525 McGavock were not great. There was a curved ceiling that created low frequency problems for the bass notes, and curtains had to be hung to help deaden the room.

To achieve the clear-cut sound of Heartbreak Hotel, the engineers used wall-like baffles to prevent the sound from one instrument bleeding into another.

Finally, to isolate Elvis’s voiceand create the echo, engineer Bob Farris set up a speaker at one end of a long hallway and a microphone at the other end, recording the echo live.

Everyone at RCA hated Heartbreak Hotel. But it sold in millions.

In a supreme act of vandalism, the studio at 1525 McGavock was pulled down in 2006 and is now a parking lot. 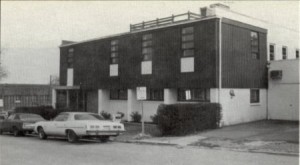