Although it was the Echoplex tape delay unit that defined much of the rockabilly sound throughout the 1960s, it wasn’t the first tape echo machine on the market.

Sound engineers had begun to experiment in the late 1940s with units that could be used in recording studios and which were portable enough to be used during live appearances. 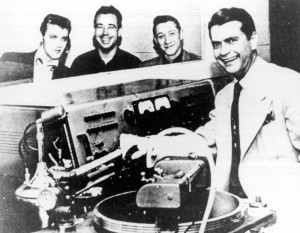 It was Ray Butts who in 1953 made the breakthrough with his EchoSonic, a portable guitar amplifier that had a built-in tape echo effect.

Butts owned a music store in Cairo, Illinois, and started experimenting when a local guitar player named Bill Gwaltney asked him how he could replicate some of the studio sounds that Les Paul was creating.

Using the new plastic recording tape that had been introduced by 3M, Butts built the first EchoSonic amp, which was duly bought by Gwaltney.

Butts next took himself off to Nashville, where he looked up Chet Atkins in the phone book and introduced himself. Atkins bought the second EchoSonic, using it to memorable effect on his 1954 recording of Mr Sandman.

Listening in on the radio to Chet Atkins was a young guitar player named Scotty Moore, who decided he wanted to achieve a similar sound.

Moore was doing studio work for Sam Phillips, the owner of Sun Studio, which was equipped for a slapback echo sound, achieved with two Ampex 350 recorders.

Sun had been recording a young hopeful named Elvis Presley, and Moore thought the EchoSonic effect would complement the sound Phillips was achieving with Presley’s voice.

Moore therefore became either the third or the eighth customer for Butts’ ingenious machine, depending on which version of the story you hear.

What is for sure is that Scotty used the EchoSonic on Mystery Train, and on every subsequent recording he made with Elvis, coupling it with his Gibson Super 400.

Fellow Sun artist Carl Perkins soon picked up on the sound, as did many other guitar players of the 1950s.

Butts however had neglected to patent his invention, and other manufacturers copied the design. The most successful of these was the Echoplex, which took over from EchoSonic as the 1960s dawned. 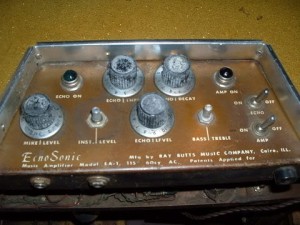 Making El Paso The rebirth of the uke
Scroll to top