The running joke is that the drummers are often neglected. Never in the spotlight and ridiculed because of it. It’s easy to put down the drummer, traditionally speaking but the beat of the drum is often the most crucial aspect of a band’s music and tone. There is no beat, nor rhythm without drums and there is something so fundamentally primitive and pure about drumming. 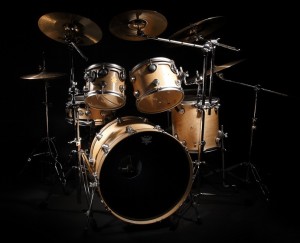 The most common drum-set is the 4-piece that includes the snare and bass drum sets, a single mounted tom and a floor tom, originally made popular by Ringo Starr with the Beatles. It’s also popular because:

Additional toms that come with bigger sets such as a five-piece, six-piece or larger ones than those are routinely used in genres including metal and heavy rock. For the beginner and a casual drummer, a starter drum set or a 4-piece will do swimmingly and makes for a good choice.

Drums with different woods offer distinctively different sounds, each of which are unique. Some of the most-used wood for producing drums are:

Drummers will swear that cymbals are a fundamental component of drum sets. Ironically, most drum sets don’t come with cymbals which leaves you to buy them separately. Different kinds of cymbals include: