Whoever said that big sounds don’t come in a little package? And why do we use the Fender Champ 600 in our Recording Studio? 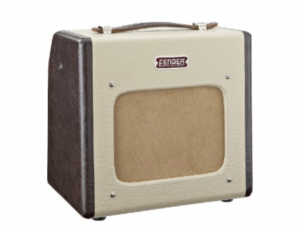 The Fender Champion “600″ is an impressive sounding amplifier with a minimal footprint in your music space. At first glance, you may simply overlook this amp for a bigger amp sitting beside it, one that has a few more features and knobs, but don’t let the size of this amp deceive you from its true potential.  “The Champ,” as it’s known by many, is a tube powered amp that was originally manufactured by Fender in 1948, and later discontinued in 1982. In 2006, Fender reintroduced the model as part of their “Modified Vintage” Line. It went through several on & off phases of production, until it was finally discontinued in 2016.

The reissue model features a two-tone cosmetic look resembling that of the original amp with a “suede” decor. 600 is referring to the 6 inch speaker found inside the casing. When engineers reintroduced the Champ to manufacturing lines, they made some subtle, but calculated changes to the design. It still consists of one vacuum tube powering the amp, but the type of tube changed from the original. It now features the 12AX7 tube which was designed by RCA engineers and has a high voltage gain. What this means for musicians and guitar players especially, is that you can drive the Champ harder for more overdrive and distortion when you want to, giving the player more flexibility in their tone control.

The re-issue also features high and low input options, and with a singular volume control knob, it’s a very simple and straightforward design that allows a player of any caliber to jump right in and have fun. Because of its tube powered design, the signal passing through will always get that added ‘warmth’ coloration and tube saturation that is so often sought after in the world of audio. And the harder you drive the amp, the more of that tone you can get from the tube!

The Champ is known for its simple circuitry design and low output noise. In fact, it has the lowest output and simplest circuitry of all Fender Tube amps ever built! But again, just because it has a simple design, doesn’t mean it can’t compete with the best. The Champ has been used by audio professionals time and time again specifically for its low output noise and ability to record easily.

So why do we use the Fender Champ 600 in our Recording Studio?   Here at The Record Shop, we’ve used it for a variety of recording sessions from guitar overdubs, vocals, and even recording harmonica’s! Engineers and Producers here at The Record Shop love using The Fender Champ 600 as a quick goto amp for a variety of instruments. One common technique that we use the Champ for is when we want to record vocals with an added distortion effect. The amount of distortion can be adjusted with the volume knob to drive the gain to the desired level, and can add a nice amount of grit and edginess to vocals while also adding a nice amount of warmth and saturation. Over the years, the Champ has proved its versatility in a wide range of sessions and that’s why we continue to use it time and time again! With such a small footprint and portability, the versatility of The Champ has proven its value in every session. For the price point, it’s a great addition to any collection whether it be in a professional studio or home environment.